In a quiet lane in the Yangon city is a dargah – tiny, rather inconspicuous looking.  The newly renovated modern building is unassuming and functional, the dargah of Zafar Shah as he is known around here. If you don’t look carefully at the arching name-board by the gate, you could miss the historical importance of it.

The Zafar Shah, the faithfuls pray to is the last Mughal emperor of India, who was banished from Delhi when the British crushed the revolt of 1857.

The dargah was nearly deserted when we visited, just a handful faithful reading the Quran quietly by the graves of his wife and children. Zafar Shah’s grave is one level deeper. Solitary, but well-cared for with floral garlands over it. The once forgotten emperor’s famous couplets and some photographs of his final days line the walls of the dargah.  History lessons of school varnish and embellish – The last Mughal emperor, Bahadur Shah Zafar, I was told mounted the big mutiny of 1857, the final futile attempt by Indian rulers and soldiers to thwart efforts by the British to make India a ‘jewel in the crown’ of the British empire. I thought of him as a valiant and brave revolutionary like Mangal Pandey and Nana Saheb and Tantia Tope. His name was taken along theirs. Another reading of history much later in life tells me, he was a feeble old man interested only in poetry and literature, leaving the administration of his empire to others, who cared about it. He is described as a weak emperor, ‘with a feeble hanging nether lip and toothless gums’, who spent his final years in exile bed-ridden and an exhausted force. We have William Dalrymple to thank for bringing the life and times of Bahadur Shah Zafar into perspective. 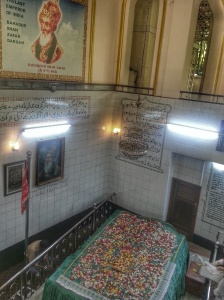 Bahadur Shah Zafar to my mind is veteran Hindi actor Ashok Kumar, who played the poet emperor to Naseeruddin Shah’s Mirza Ghalib in the serial by that name. In fact, I am more familiar with Zafar the poet, the patron king whose court poets were Ghalib and Zauq. His final lines are engraved in his dargah too – a lament of homelessness and the craving for the land of his forefathers that he meekly surrendered to the more powerful British empire before fleeing with a set of retainers and his wife and children to Rangoon.

How unlucky is Zafar! For burial, even two yards of land were not to be had in the land of his beloved.

The story goes that the British commander in Rangoon did not allow a public grave for the emperor. After burying him according to Islamic rites, he fenced the area and let wild grass grow to let him fade away into oblivion. The search for the last Mughal emperor’s grave began in 1991, the India government apparently funding the project to build his memorial in the place where he spent his last days.

Few in India know that he lies buried in faraway Yangon, a city that lay cut off for decades under the rule of the Myanmarese military junta. If you are ever in Yangon, do visit the dargah. Unlike the fabulous tombs of his forefathers like Humayun, Akbhar and Shahjahan in India, their successor’s grave is a symbol of how the British snuffed out the final rebellion out of India to make it their fiefdom to loot, exploit and control. It’s a piece of your history, one that for long lay a secret, abandoned and uncared for. The last of the long line of a once glorious Mughal rulers, who trace their lineage to Genghis Khan and Taimurlane!